THE MEANING OF THE WORD 'ICTHUS'

ICTHUS takes its name from the Greek word for "fish".

This word was used as an acronym by early Christians and a secret identification:

All together, this acronym spells out the core of the Gospel: Jesus Christ is God's Son and our Savior.  This is one of the first "secrets" that young people learn when they join an Icthus group.

John Shackelford, a former missionary in Guatemala was the person who not only gave the inspiration for the starting of this program, but also suggested that we use the name "Icthus" in 1964.  John felt that children and youth would be attracted to the word because it was originally a secret.  More importantly though, he liked how it stated the essence of the Gospel in a way that was easy to remember. 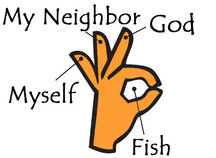