John was an encouragement and mentor to Icthus leadership from many countries.

John's new life in Christ began on August 23, 1938 when he accepted Christ as his Savior while attending Santa Barbara State College. During this time he learned to study the Word of God, which was fundamental in establishing a solid faith. That’s when God called him away from the world of business into a life of service. He went on to study at San Francisco Theological Seminary where he met and married Esther Bickford, daughter of Presbyterian missionaries to China. Together they prepared for the mission field.

In 1945 the Presbyterian Board of Foreign Missions assigned them to Colombia, South America where John helped establish churches in the jungles of the Sinú Valley. In 1950, he and Esther transferred to Guatemala, where John’s life work began. He poured himself into developing Christian leaders through youth retreats. Eventually he realized his vision to build a permanent site. Monte Sión, overlooking Lake Amatitlán, is still an active camp and retreat center. It was there that John also inspired and worked with a college student to start Icthus International.

Under his oversight, generations of Guatemalan and Latin American youth, families and pastors encountered God in a setting where Christianity was real and lived out on a daily basis; where they learned to lay strong spiritual foundations to last throughout their lifetimes.

All his life, John faithfully served the Lord he loved, sharing the gospel with all he met. Together with his best friend Esther, he taught his children to love and serve God and teach it to their children and grandchildren. John saw the story of his life as one of God doing His work, using events and circumstances for His purposes. He would want us all to give God praise for leading and directing him and Esther.

John has joined Esther in Heaven and left behind 5 children (Pep, Charlotte, Fred, Phi, and Janet) with their spouses, 8 grandchildren and 2 great-grandchildren.

Gifts can be given to honor and carry on the legacy of John.  Click Here 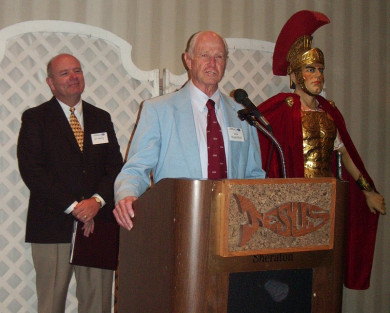 John with Gil Mertz (banquet MC) and Roman Soldier statue. He spcke at our first major Icthus Banquet in 2006